Multiple sclerosis (MS) is a degenerative disorder that affects the central nervous system (CNS), specifically the brain and the spinal cord. This disease is also known as encephalomyelitis disseminate. Damages dealed to the myelin sheath covers of nerve cells in the brain and the spinal cord are due to the demyelinating disease (destruction of myelin, the fatty tissue that surrounds and protects the nerve fibers and promotes the transmission of nerve impulses). 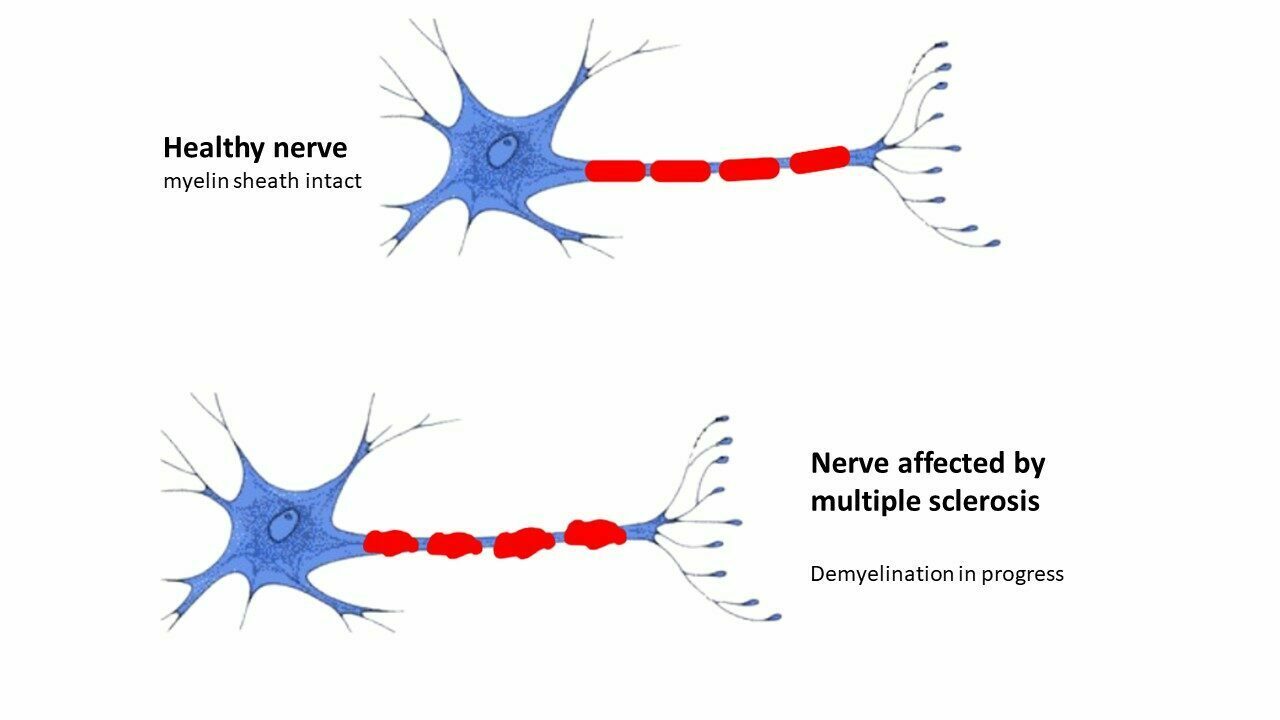 Myelin sheath is a discontinue membrane-like structure that surrounds nerve cell axons to insulate them and increase the rate of action potentials. Short gaps between the myelinated section is called nodes of Ranvier.
The CNS myelin is composed about 40% of water and 60% of dry mass in aim of the insulation of the nerves. Dry mass contains around 75% of lipid and 20% of protein. Protein percentage includes 3 different proteins : firstly, myelin oligodendrocyte glycoprotein (MOG), which is specific to the CNS, secondly proteolipid protein (PLP), which is the most abundant protein in CNS myelin and finally myelin basic protein (MBP) that plays a role in organization of the structure of myelin sheaths.
Some of parts of this protein (peptide) are the most exposed to the environment.
When EAE is triggered, this exposed part become an epitope focus of the immune system. So the proteins are damaged and they can’t manage their role of insulation. Find here the different structure of these myelin structural protein.

MOG (Myelin Oligodendrocyte Glycoprotein – UniProtKB – H0Y8A0) is a structural protein expressed in the outer surface of the myelin sheath, that surronds neurons and axon to provide efficient action potential electrical conduction. Injection of a fragment of this protein (peptide) leads to the EAE.

MBP (Myelin Basic Protein –  UniProtKB – P02686) is a structural protein found in the inner myelin layer and plays a role in the organization ot the structure. Studies about the pathogenesis of the autimmune neurodegenerative disease multiple sclerosis MBP has been identified as a factor.

PLP (ProteoLipid Protein UniProtKB – B1B1G1) is the major myelin protein from the central nervous system. It plays a crucial role in the maintenance and creation of the structure of the myelin. Induction of a T cell mediated chronic relapsing autoimmune encephalomyelitis in animals and therefore is a candidate for an antigen involved in the pathogenesis of multiple sclerosis.

Actually, it is known that the development of the Multiple sclerosis is due to a predisposing genetic trait and requires an inciting environmental insult such as a viral infection (1). Target tissues’s damages are due mostly to autoreactive CD8+ T cells, antibodies against myelin (i.e. anti-PLP, anti-MOG, anti-MBP) and factors produce by innate immune cells (i.e. IFN, cytokines…). CD4+ T cells and their differentiation into Th1 phenotype are important in the initial steps of the disease and during the evolution of the multiple sclerosis.

No cure are known for Multiple sclerosis at the moment. Drugs used to help against MS in general prevent new attacks or attempt to improve the function after attack, but they have side effects. However some therapies exist like, firstly plasmapheresis (remove and exchange the blood plasma to take off antibodies), secondly kinesitherapy (treatment of disease by passive and active muscular movement), in addition of the occupational therapy (re-education, readaptation or even rehabilitation, through the activity) and finally immunotherapies (treatment by activating or suppressing the immune system).

In order to develop new treatments, researchers use various models. A frequently used model consists in inducing a MS phenotype in mice to study the demyelination of the CNS. This technique consists in injecting an antigen peptide in mice to create an experimental model nammed EAE or Experimental autoimmune encephalomyelitis.

Experimental autoimmune encephalomyelitis (EAE) is one of the most popular animal models of multiple sclerosis (MS). In fact, mouse models of demyelinating diseases have been useful in both the demonstration of T cell-mediated demyelination and in the characterization of the pathogenesis of immune-mediated demyelinating disease. EAE is a CD4 + T cell-mediated, demyelinating autoimmune disease of the CNS that is characterized by mononuclear cell infiltration.
Model of multiple sclerosis EAE can be induced by 2 different pathways. First pathway is the passive induction by the adoptive transfer of pre-activated myelin-specific T cells into naïve mice. Then the second pathway consists in injecting animals with a mixture of pathogens (CFA emulsion with antigens and PTX).

Administration of CFA/antigen emulsion is the most common way to induce EAE. Among them, different myelin protein epitopes can be used as antigens to induce EAE, such as myelin basic protein (MBP), Myelin oligodendrocyte glycoprotein (MOG) or proteolipid protein (PLP).

Discover our range of peptides for EAE induction

Multiple sclerosis (MS) is a chronic inflammatory demyelinating disease of the central nervous system of unknown etiology. We tested the hypothesis that MS is caused by Epstein-Barr virus (EBV) in a cohort comprising more than 10 million young adults on active duty in the US military, 955 of whom were diagnosed with MS during their period of service. Risk of MS increased 32-fold after infection with EBV but was not increased after infection with other viruses, including the similarly transmitted cytomegalovirus. Serum levels of neurofilament light chain, a biomarker of neuroaxonal degeneration, increased only after EBV seroconversion. These findings cannot be explained by any known risk factor for MS and suggest EBV as the leading cause of MS. /p>

Background: Myelin oligodendrocyte glycoprotein induced experimental autoimmune encephalomyelitis (EAE) is the most commonly used animal model of multiple sclerosis. However, variations in the induction protocol can affect EAE progression, and may reduce the comparability of data.

Optimized method: In the present study, we investigated the influence of the different components used for EAE induction in C57BL/6J mice on disease progression. In the present study, MOG35-55-induced chronic EAE in C57BL/6J mice has been applied as a model to challenge optimal pertussis toxin (PTx) dosing, while considering variations in batch potency.

Results: We demonstrate that the dosage of PTx, adjusted to its potency, influences EAE development in a dose-dependent manner. Our data show that with our protocol, which considers PTx potency, C57BL/6J mice consistently develop symptoms of EAE. The mice show a typical chronic course with symptom onset after 10.5 ± 1.08 days and maximum severity around day 16 postimmunization followed by a mild remission of symptoms.

Conclusion: Higher standards for comparability and reproducibility are needed to ensure and maximize the generation of reliable EAE data. Specifically, consideration of PTx potency. With our method of establishing consistent EAE pathogenesis, improved animal welfare standards and a reduction of mice used in experimentation can be achieved.

[Protein composition and structure of the myelin sheath. Part I]

During the past few years, significant advances have been made in meeting structure of myelin sheaths and the mechanisms participating in myelination and demyelination. Myelin is formed by Schwann cells in the peripheral nervous system (PNS) and oligodendrocytes in the central nervous system (CNS). Myelin is composed of several layers of membranes wrapped around axons. In contrast majority of biological membranes both CNS and PNS myelin is characterized by a high ratio between lipids and proteins. Myelin in CNS and PNS don’t differ in respect to lipids, but their protein components are different. Better understanding of myelin structure and function and as well as processes of myelination and demyelination will help to clarify some aspects of demyelinating diseases and injures in the nervous system.