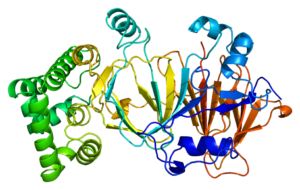 RANTES (or Regulated upon Activation, Normal T-cell Expressed and Secreted), also known as CCL5 (Chemokine (CC chemokine ligand 5), is a protein classified as a chemotactic cytokine or chemokine.
Chemokines are small soluble proteins that act as molecular signals to induce cellular migration during inflammation.
RANTES is a member of the CC chemokine family and is involved in immunoregulatory and inflammatory processes.
RANTES is expressed in a lot of immune cells and acts as a potent chemoattractant for T-cells, basophils, eosinophils, monocytes and other cell types by playing a major role in recruiting leukocytes into inflammatory sites and to activate them. RANTES also induces proliferation and activation of certain natural killer cells.
RANTES synthesis is induced by TNF-alpha and IL-1 alpha, interacts with CCR3, CCR1 and CCR5 and activates some G-protein coupled receptors.
Many of the biological activities of RANTES (Ca2+ influx, chemotactic response, basophil activation, T-cell signaling) are observed between 40 and 8000 ng/mL.

Regulated upon Activation, Normal T-cell Expressed, and Secreted (RANTES) is a well-known pro-inflammatory chemokine and its role in ischemic stroke remains controversial. We examined the significance of RANTES in ischemic stroke and aimed to elucidate the direct effect of RANTES on neurons. Plasma concentrations of major C-C chemokines, including RANTES, and neurotrophic factors were examined in 171 ischemic stroke patients and age- and gender- matched healthy subjects. Plasma concentrations of RANTES at day 0 after onset were significantly elevated in stroke patients, compared with controls, and were highly correlated with those of BDNF, EGF, and VEGF. In a mouse middle cerebral artery occlusion model (MCAO), plasma RANTES was significantly elevated and the expression of RANTES was markedly upregulated in neurons particularly in peri-infarct areas. The expression of CCR3 and CCR5, receptors for RANTES, was also induced in neurons, while another receptor, CCR1, was observed in vascular cells, in peri-infarct areas after MCAO. We examined the effects of RANTES on differentiated PC12 cells, a model of neuronal cells. Treatment with RANTES induced the activation of Akt and Erk1/2, and attenuated the cleavage of caspase-3 in the cells. RANTES increased the expression of BDNF, EGF, and VEGF in the cells. Moreover, RANTES maintained the number of cells under serum free conditions. The RANTES-mediated upregulation of neurotrophic factors and cell survival were significantly attenuated by the inhibition of Akt or Erk1/2. Taken together, RANTES is an interesting chemokine that is produced from neurons after ischemic stroke and has the potential to protect neurons directly or indirectly through the production of neurotrophic factors in peri-infarct areas.

Differentiated human NT2-N neurons were shown to express CCR5 and CXCR4 chemokine receptor mRNA and protein, and to be responsive to the chemokines CCL5 and CXCL12. Using cDNA microarray technology, CCL5 was found to induce a distinct transcriptional program, with reproducible induction of 46 and 9 genes after 2 and 8 hr of treatment, respectively. Conversely, downregulation of 20 and 7 genes was observed after 2 and 8 hr of treatment, respectively. Modulation of a selected panel of CCL5-responsive genes was also confirmed by quantitative RT-PCR and Western blot and compared to gene expression changes induced by CXCL12 treatment. Gene clustering identified distinct functional subsets of CCL5-responsive molecules, and a significant number of expressed sequence tags encoding unknown genes. CCL5-responsive genes comprise a significant number of enzymes, transcription factors, and miscellaneous molecules involved in neuronal survival and differentiation, including neurite outgrowth and synaptogenesis. Our results suggest that CCL5 biological functions might go beyond its recognized chemotactic activity in the central nervous system, in particular with regard to the control of neural plasticity events both during development and in postnatal life.

The most common cause of mortality in cancer patients is metastasis. Therefore, a variety of therapeutic strategies are currently under investigation to develop effective drugs that can target and inhibit factors that promote tumor invasion. Considerable emphasis has been placed on studying cancer as an inflammatory process that proceeds in a dynamic microenvironment. In fact, the tumor microenvironment has been implicated to contribute considerably to metastasis. For instance, chemokine C-C motif ligand 5 (CCL5) produced by cells in the tumor microenvironment has been established as an important contributor to metastatic disease. Recently, the role of CCL5 in breast cancer invasion has been extensively studied. This review summarizes the recent developments in regards to this chemokine, including the conditions that increase the generation of CCL5 and the effects mediated by this signaling pathway. Moreover, the potential use of CCL5 and its receptor chemokine C-C motif receptor 5 (CCR5) as a target for treating and/or preventing breast cancer metastasis is also discussed.