Tumor Necrosis Factor α, also known as Cachectin (uniprot P01375), is a cytokine secreted by macrophages to warn other immune cells of an infection. Structurally speaking, TNF- α is a trimer of 233 amino acids whose subunits are essentially organized in a beta-sandwich structure formed by two anti-parallel beta-pleated sheets. 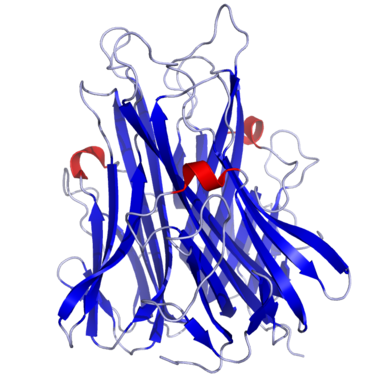 Due to its primary role in immune cells regulation, dysregulation of its production has been associated with the pathogenesis of several chronic inflammatory medical conditions including rheumatoid, psoriatic and juvenile idiopathic arthritis, psoriasis and inflammatory bowel disease (IBD), among others. Moreover, its adipokine activity tends to promote insulin resistance leading to obesity-induced type 2 diabetes.

Adalimumab is a therapeutic human immunoglobulin G1 (IgG1) anti-TNF-α monoclonal antibody (mAb) which binds specifically and with high affinity to TNF-α, in order to inhibit its interaction with TNFR1 and TNFR2 receptors. Moreover this recombinant Ig has the power to lyse the surface of TNF-expressing cells in vitro in the presence of complements, thus impairing TNF signaling pathway efficiently.

Nowadays, hundreds of mAbs are in clinical development, hence the need to establish their pharmacokinetic properties in pre-clinical studies. Even though samples are often analyzed using immunoassays, alternative methods, such as quantitative proteomics by liquid chromatography coupled with tandem mass spectrometry (LC-MS/MS), are emerging.

In order to quantify proteins of interest by LC-MS/MS, SIL signature peptides are used. In this case, the APYTFGQGTK peptide sequence was chosen for Adalimumab quantification in blood samples. This peptide is part of the mAb’s light chain and the increased mass of its heavy peptide counterpart, marked by 13C and 15N-labeled Lysine, allow targeted measurement of Adalimumab level in vitro.

The use of therapeutic monoclonal antibodies (mAbs) is steadily increasing. Previous studies have reported the clinical interest of mAb therapeutic-drug monitoring (TDM), including that of adalimumab, for patients with Crohn’s disease (CD). Proof of concept mAb-quantification studies by liquid chromatography mass spectrometry (LC-MS/MS) have been published, but a specific and reliable routine-suited multiplex quantification method is still needed to facilitate mAb TDM.

Calibration curves were linear from 1 to 100 μg mL−1, except for rituximab (5–100 μg mL−1). This method was reproducible, repeatable, and accurate (coefficient of variation and bias < 20%), with no cross contamination. Adalimumab concentrations were significantly higher (p = 0.0198) for patients with biological remission (median: 11.3 μg mL−1 [4.6; 18.3]) than that for patients without a biological response (9.5 μg mL−1 [3.94;17.0]). An adalimumab cut-off concentration of 8.0 μg mL−1 correctly discriminated patients with or without biological remission (sensitivity: 74.1%, specificity: 57.9%).

This validated LC-MS/MS routine-suited method is the first allowing simultaneous quantification of up to seven mAbs acting against different pharmacological targets. It opens the field of TDM to numerous mAbs.

Background: Adalimumab (ADA) and infliximab (IFX) are therapeutic monoclonal antibodies targeting tumor necrosis factor-alpha (TNFα). They are used to treat inflammatory diseases. Clinical trials have suggested that therapeutic drug monitoring for ADA or IFX could improve treatment response and cost effectiveness. However, ADA and IFX were quantified by ELISA in all these studies, and the discrepancies between the results obtained raise questions about their reliability. We describe here the validation of a liquid chromatography-tandem mass spectrometry (LC-MS/MS) method for the simultaneous quantification of ADA and IFX in human samples.

Methods: Full-length antibodies labeled with stable isotopes were added to plasma samples as an internal standard. Samples were then prepared using Mass Spectrometry Immunoassay followed by trypsin digestion before ADA and IFX quantification by LC-MS/MS. ADA and IFX were quantified in serum from patients treated with ADA (n = 21) or IFX (n = 22), and the concentrations obtained were compared with those obtained with a commercial ELISA kit.

Results: The chromatography run lasted 8.6 minutes, and the quantification range was 1-26 mg/L. The method was reproducible, repeatable, and accurate. For both levels of internal quality control, for ADA and IFX, interday and intraday coefficients of variation and accuracies were all within 15%, in accordance with FDA recommendations. No significant cross-contamination effect was noted. Good agreement was found between LC-MS/MS and ELISA results, for both ADA and IFX.

Conclusions: This LC-MS/MS method can be used for the quantification of ADA and IFX in a single analytical run and for the optimization of LC-MS/MS resource use in clinical pharmacology laboratories.

A liquid chromatography–quadrupole time-of-flight (Q-TOF) mass spectrometric method was developed for early-stage research on adalimumab in rats. The method consisted of immunoprecipitation followed by tryptic digestion for sample preparation and LC-QTOF-MS/MS analysis of specific signature peptides of adalimumab in the positive ion mode using electrospray ionization. This specific signature peptide is derived from the complementarity-determining region (CDR) of adalimumab. A quadratic regression (weighted 1/concentration), with an equation y = ax2 + bx + c, was used to fit calibration curves over the concentration range of 1–100 μg/mL for adalimumab. The qualification run met the acceptance criteria of ±25% accuracy and precision values for quality control (QC) samples. This qualified LC-QTOF-MS/MS method was successfully applied to a pharmacokinetic study of adalimumab in rats as a case study. This LC-QTOF-MS/MS approach would be useful as a complementary method for adalimumab or its biosimilars at an early stage of research.

Tumor necrosis factor (TNF) is a proinflammatory cytokine that is involved with normal inflammatory and immune responses and with the pathogenesis of chronic inflammatory medical conditions, such as rheumatoid arthritis, psoriatic arthritis, plaque psoriasis, and Crohn’s disease. The newest therapies for these inflammatory conditions include the TNF biologic response modifiers infliximab, etanercept, and adalimumab. Adalimumab is a human recombinant immunoglobulin G1 anti-TNF monoclonal antibody. As monotherapy, or in combination with methotrexate or other traditional disease-modifying antirheumatic drugs, adalimumab can produce improvements in the signs and symptoms associated with rheumatoid arthritis and can slow progression of the joint destruction. The adverse effect profile of adalimumab seems to be comparable to that of etanercept. Adalimumab also seems to be useful in the treatment of psoriasis, psoriatic arthritis, and Crohn’s disease; however, none of these indications are approved by the US Food and Drug Administration, and the optimal dosing regimen for these indications has not been established.

The structure of tumour necrosis factor – implications for biological function

The three-dimensional structure of TNF has been determined at 0.29 nm using the technique of X-ray crystallography. Published data on site-directed mutagenesis and antibody binding may now be assessed in the light of the structure, thus the links between structure and function for TNF may be addressed.

TNF is a compact trimer composed of three identical subunits of 157 amino acids. The mainchain topology for a single subunit is essentially a β-sandwich structure formed by two anti-parallel β-pleated sheets. This mainchain fold corresponds to the ‘jelly roll’ motif observed in viral coat proteins such as VP1, VP2 and VP3 of rhinovirus, or the hemagglutinin molecule of influenza. TNF is the first non-viral protein to contain this motif. The subunits associate tightly about a threefold axis interacting through a simple edge-to-face packing of the β-sandwich to form the solid, conical shaped trimer. A large number of the residues conserved between the amino acid sequences of TNF and lymphotoxin lie within the β-sandwich or at the threefold axis of the trimer. This implies the presence of the same β-sandwich motif in the lymphotoxin monomer and preservation of the edge-to-face mode of trimeric association.

The detailed three dimensional structure for TNF explains a wide range of observations, including data on antibody binding and site directed mutagenesis. The currently available evidence points to a region of biological importance situated at the interface between two subunits on the lower half of the trimer.